Thomas Till and Son/s Online Museum

We love collecting things from the past and living in the past, especially the Victorian and Edwardian eras.  We both share a fascination of the enquiring mind of the Victorian era and the individual inventor or scientist. We also collect scientific and medical items from the past and adapt our collection for everyday use. This doesn't mean that we are completely precious about avoiding the 2oth and 21st Centuries - the dishwasher is proof that we are extremely flexible! - but we do enjoy preserving crafts from a bygone era, using older pre-loved items, have a 'make do and mend' mentality which we inherited from our own families but I believe this is called recycling these days ... We keep Clydesdale horses because they are heavy working horses from a bygone era and  a rare breed. Fortunately more people are using the Clydey as a riding horse. So we love to be surrounded by old things, dare I call them antiques? To be fair, most Till earthenware is over one hundred years old so it probably does have antique status. However, Till items have more meaning for us. Some of the pottery is quite exquisite Imari ware, handpainted floral designs, flowblue or transferware designs. Some items are frankly quite gaudy and certainly not to our taste. Other items are tastefully plain or just incredibly boring. For us, however, tracing the history of Thomas Till, the patterns and forms of different earthenware and simply being surrounded by hundreds of tureens, platters, jugs and bowls, our life has been completely transformed (or do I mean taken over?!) by our enduring interest. It is not just the products produced by Thomas Till that interests us but also the actual life of Thomas and his extended family. Coming from a family of potters he was a self made man and elevated his family to a higher middle class status that was typical of the industrial age.

Thomas Till elevated himself into the Victorian middle class by providing good quality table wares  to the Victorian middle class but his family were not born into wealth - indeed, his father,  immediate siblings and half siblings were described as potters, pottery painters and having other manual occupations in the various census returns. Upwards class mobility was not easy at this time. Most people stayed in the class they had been born to and often enjoyed jobs for life - a very different process from today.

The two links below lead to an interesting appraisal of the Victorian middle class which includes any non-manual white collar worker who was seen to work with letters or figures from a clerk on £100 per year up to a Chairman of the Board on the grand sum of £1000 per annum.

The reason we are interested in class is because we are interested in the type of family would have bought Till & Sons earthenware. What occupations did they do? Who were they? Was Till & Sons seen as luxury table ware to those who bought them or were the wares seen as utility wares?  At present it is probably not unreasonable to assume that Till could be both utility or luxury depending on what was acquired. Let us make no mistake - Till & Sons did not compete with the aristocratic Wedgewood/Spode/Royal Doulton table wares which were produced for the richest few in society. But Till & Sons did produce quality items that  would grace an important middle class family, such as their tea sets, dressing table and wash sets. These items would have been beyond the budget of most working families. The odd tea set may have graced the parlour of a better paid working class family but mostly the extensive dinner and tea sets were certainly aimed at those who valued nice things in life and wanted to be comfortable and demonstrate their comfort socially.

We love the ideas, lifestyles and inventions of individuals but we also recognise the bigger picture of the social and economic changes during this time. Indeed, without the increasing factory production during this period we would not have a vast collection of Till & Son/s earthenware. Each piece elicits an image of the type of family or individual who might have used the pottery.  Some painted pieces suggest a more relaxed and 'bohemian' or arts & crafts inspired setting. Whereas the classical Imari 'Pekin' or 'Shanghae' designs would not be out of place in an upper middle class family. One had to have a comfortable lifestyle to be able to afford the twelve piece settings or the washbowl and jug sets. We do not believe that Till earthenware would have been produced for the average working family until the production of Tillson Ware much later on before the company ceased production in 1928. Indeed many of our early Victorian pieces look stunning when laid to table with silver plated flatware on our Victorian barley twist drop leafed table and ornately carved oak chairs.

We actually began collecting Till & Sons earthenware quite by accident. After spotting a single platter in a charity shop in Stornoway on the Isle of Lewis (where we were living) we found out that it was just one item of a part twelve piece dinner service named 'Venus'. A simple flow blue design, it appealed to us as something we could use for special occasions but we did not realise it's age.  A quick check on the internet showed us that Thomas Till, and subsequently Till & Son/s were only operating between 1850 to 1928 at Sytch Pottery. Burslem, Staffordshire. Thomas Till had been operating as an earthenware manufacturer before this time with partners William Barker and James Sutton (operating between 1834 - 1846) and then William Barker. Barker and Thomas Till (operating between 1846 - 1850). An advertisement for Thomas Till states that the company was established in 1825. Our investigations into the Till family certainly show that there is a strong background of working in the potteries but there is no evidence that Till was a manufacturer at this time. Putting together the Till family has proved to be a real piece of detective work worthy of  Sherlock Holmes and involved a lot of leaps of faith. It was pure chance that we found William Till and his wife Mary staying in a Welsh hotel during one census and Edwin Till being on a business trip to Inverness at another time. We have had to rely on census material as we have yet to uncover any material on Thomas Till. We can only imagine what he looks like.

We have since managed to acquire a complete dinner service in the Venus pattern - the original challenge - but as in all the best console games we are always trying to get to the next level! 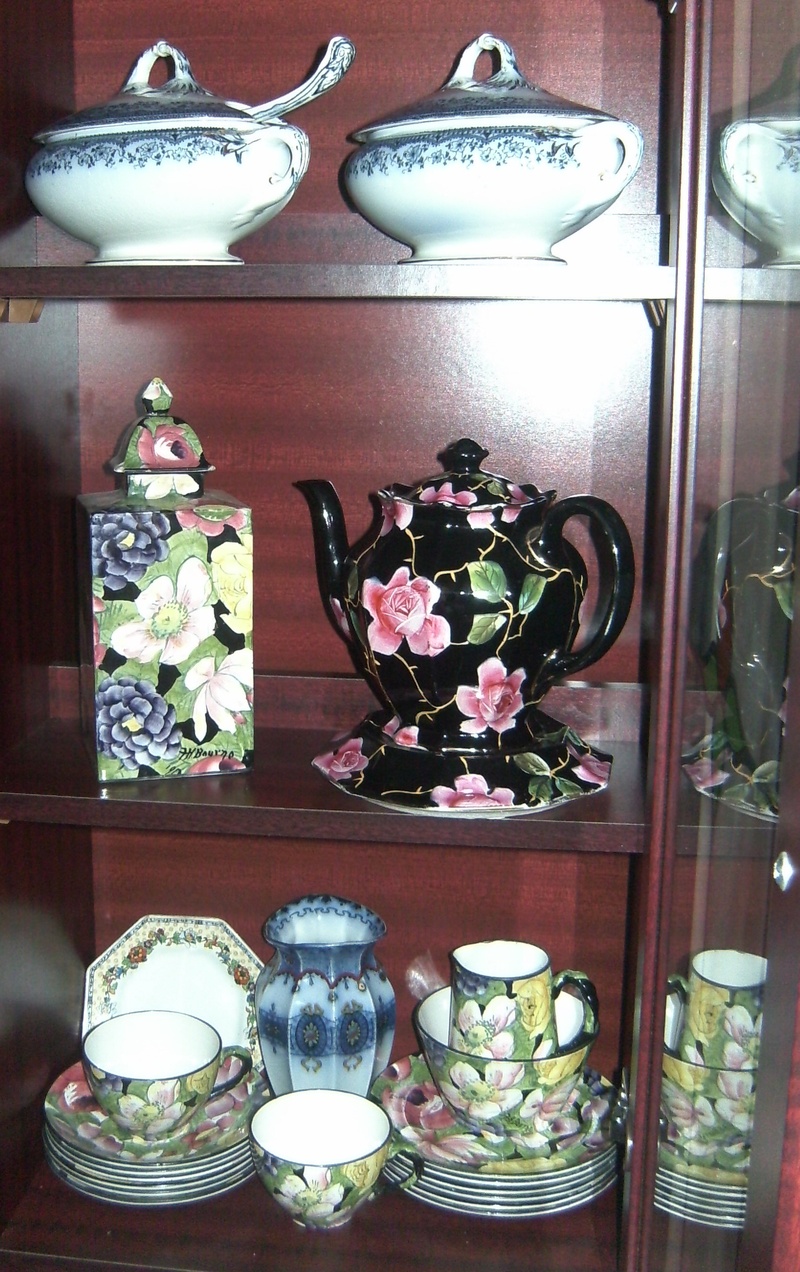 {Just a very small selection  of our extensive T.Till & Son/s collection including two "Italian" lidded tureens (one with an original ladle), a handpainted spice jar handpainted and signed by F.H.Bourne, a hand finished transferware teapot with stand, a small hexagonal Tillson Ware side plate, "Belgrade" polychrome vase and some items from a handpainted tea service including a creamer and sugar bowl.}

What saddened us most was that however hard we tried we could not find out a great deal about T.Till & Sons so we felt obliged to redress the balance to this superb and underrated Victorian/Edwardian  earthenware manufacturer by setting up this internet site and sharing our finds.

After having  spent many hours searching for any information on Thomas Till and managing to acquire a significant collection of Till earthenware we are slowly photographing our complete collection and entering examples of each pattern or form onto this site as a resource for anybody who is interested in Till & Sons or simply wish to identify and date a pattern.

Links to sites that cater for those who enjoy living in the past.

DreamDraigon Designs produce bespoke articles of clothing and accessories in Victorian Gothic, Gaslamp Fantasy, Steampunk, Romantic Edwardian and Medieval styles suitable for special occasions such as weddings, handfastings, etc, or everyday wear for those who like to dress individually. Each garment, mostly made to order, caters for men, women, maternity, boys, girls and infants.  Items are customised with original artwork in the form of celtic knotwork, embroidery, quilting,fabric paint, beading, etc. DreamDraigon Designs utilise unusual fabrics and prefer to work outside the box.

The company is committed to reducing unecessary use of power and every garment is completely handsewn or sewn using a traditional handcranked Singer sewing machine.

The company is also dedicated to the ideology of making children's clothes fun to wear but age appropriate and commits to avoid designs that sexualise or promote innapropriate behaviour.

Please visit our website Post House Tales dedicated to our attempts to bring back gas & oil lamp fantasies of Neo-Victorianism and Edwardianism  into our everyday lives and how we attempt to incorporate the conveniences of the 21st Century into our lifestyle and compromise modern living with that of a bygone era.